What are the fascinating features of the SkToolbox – Console and Chat Functionality Extender game? Is it useful to the players? Find out about this game mod now.

When you start playing Valheim, you will learn a lot about this game.

So did you find out about SkToolbox – Console and Chat Functionality Extender game mod yet?

Is it truly beneficial to the players? Please join us to learn about this game mod right now.

Before learning about SkToolbox, we will give you some general information about the very popular Valheim on Steam game today.

Although only released in February 2021, Valheim has become a popular game in the world gaming community and is on the top of Steam Early Access’s highest sales chart.

That is a Viking-style survival action game that is very attractive to a lot of players. They sold more than a million copies in 8 days since its release date.

And a lot of Valheim game mods have been produced since then, including SkToolbox – Console and Chat Functionality Extender. That is a game mod that supports expanding the functionality of chat commands in the chatbox and the Valheim game console without changing the game too much. Even the latest version of SkToolbox comes with a few commands to slightly modify the terrain, change Freecam and change the weather name.

The main feature of SkToolbox is accurate as its name suggests. Thanks to SkToolbox, you can change and explore the world of Valheim with 50 commands. SkToolbox will assist you to scroll through previously entered commands with ease and without limitation as you modify your console.

You can use the up and down arrows on your keyboard to slide up and down between lines of commands you have typed. What’s special in SkToolbox is that every command you type will be linked and chained together. And on the same line, you can enter an unlimited number of lines of commands. Very fast and convenient!

For example, you can type the command in the settings: / set skill [Skill] [Level] (this command has the function of setting the skill level of your character).

Once you install SkToolbox, you won’t need to launch and reload commands. Because every command you enter is automatically started and executed at the server. But these commands are only booted into the first server to save time. Edit the dashboard theme, image, and style to your liking.

Terrain Editing- This feature can make your game a bit laggy if you apply it to a very large terrain area. Therefore, you should be careful when using the commands related to this function.

Through the configuration editing file, you can modify the panel image and style according to your wishes. Therefore, the color, size, and font will match the player’s aesthetic and help them have a better experience.

New Features and Behaviors
This mod works by extending the functionality of the console and chat by providing additional behaviors, commands, and customizations.

Please backup your world before using the terrain modification commands.

Press Numpad 0 to open the on-screen controls. Try /alt if you don’t have numpad keys! 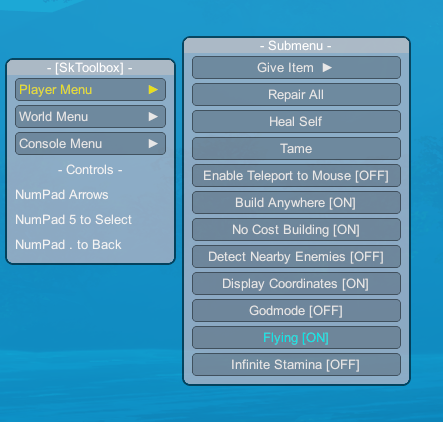 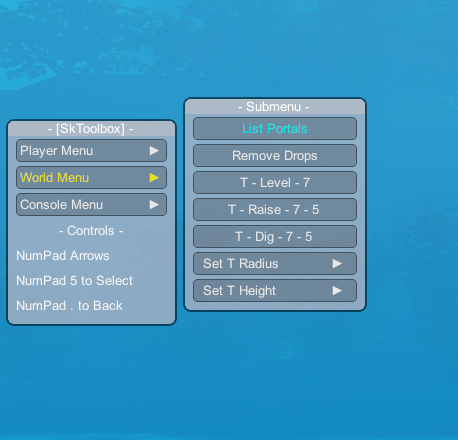 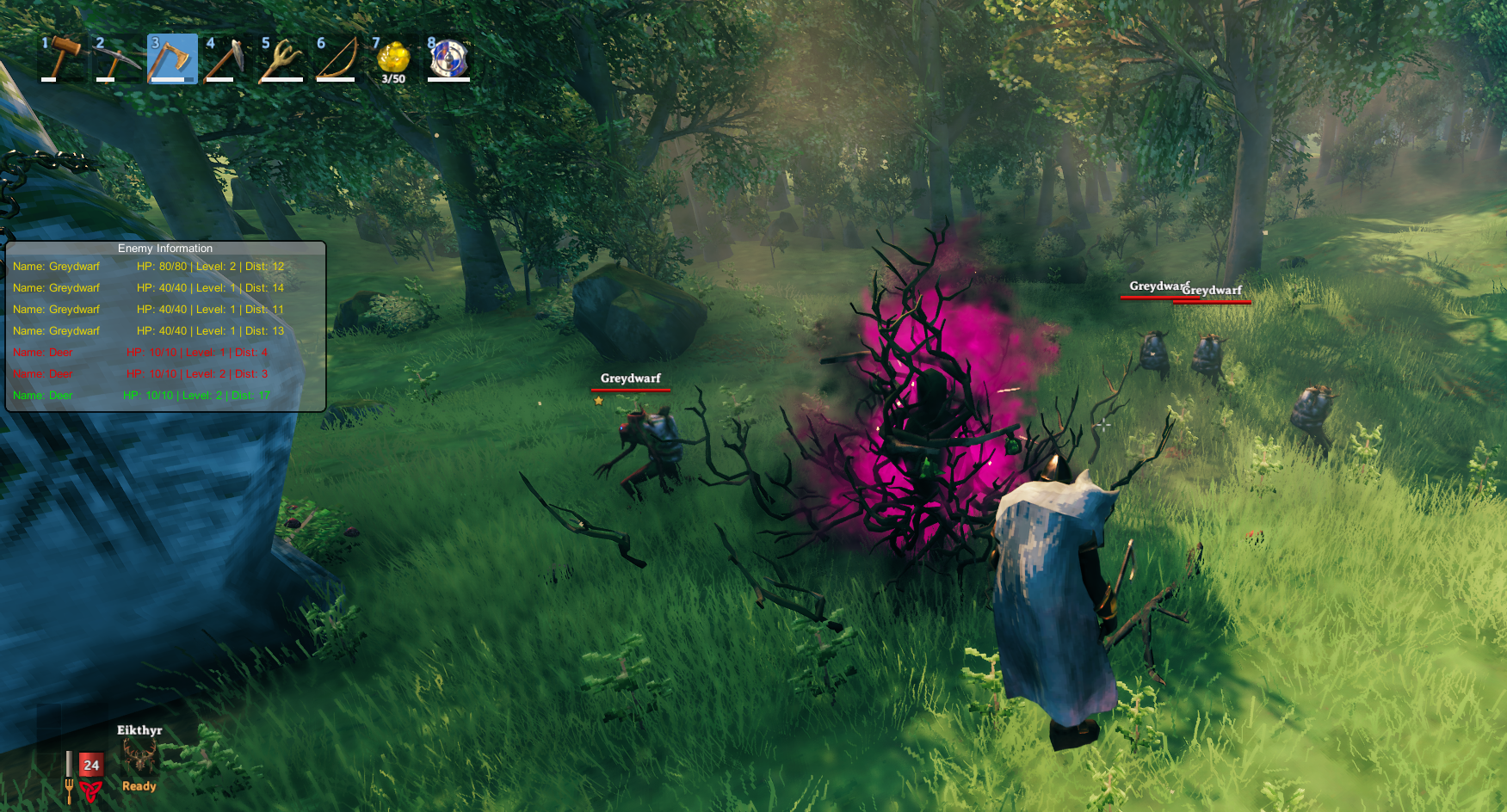 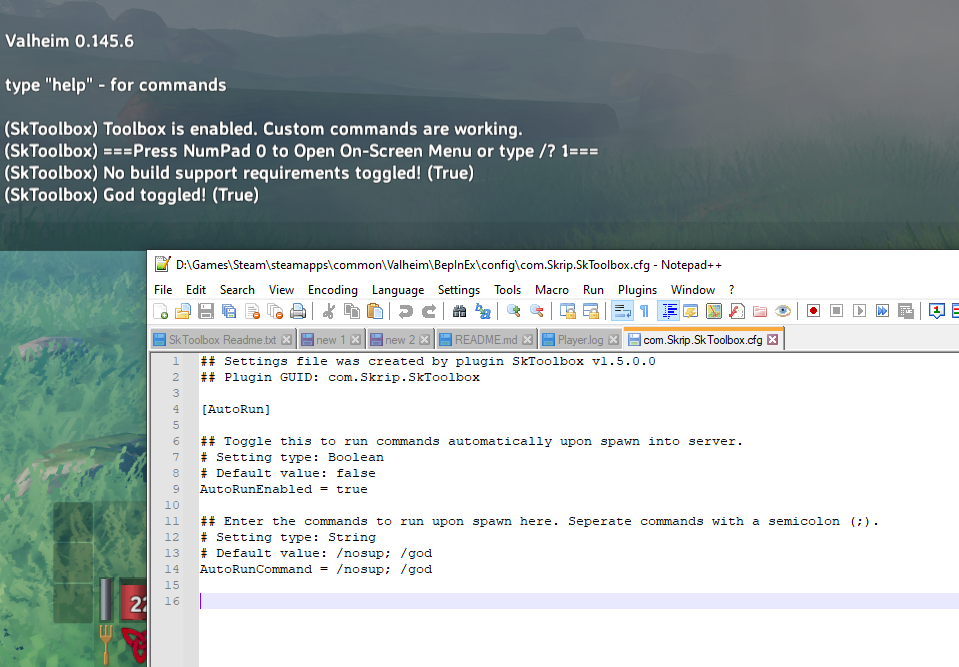 How To Use
When you are ready to use the mod, you’ll simply type “help” in the console (F5) to see the available commands. Note you’ll see the default commands, and a new one at the bottom! 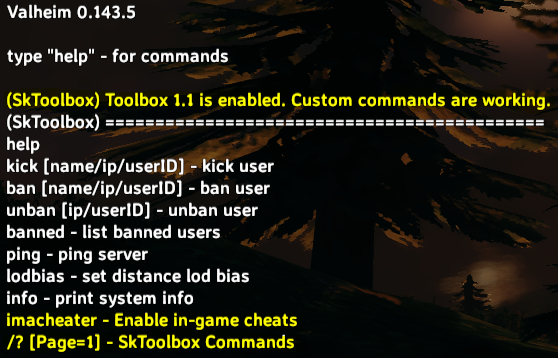 If you then enter /? to see the Toolbox help, you’ll see a list of available commands, their usage, and a description:

Overall, SkToolbox is a great game mod because it is produced with many functions and rich in commands. SkToolbox will not disappoint players because of it. SkToolbox – Console and Chat Functionality Extender is really useful and players should consider experiencing it.

How To Install SkToolbox Mod?
This mod is installed to your client not a server.
• Simply open the BepInEx zip file and extract all contents to the game’s root directory (You’ll see valheim.exe and UnityPlayer.dll in this folder).

• Run the game and enjoy.
If you are just updating or already have BepInEx installed and you downloaded the DLL file, just place this file in the BepInEx plugins directory.

• I just need to update! What do I do?
• Extract the .dll file to the plugins folder, run the game.

All of them. This mod is not known to interfere with other mods

No. This mod is designed for maximum compatibility. It is unlikely a game update will break this mod. If there is a break, it is likely that only specific commands will break. So far this has not occurred on any version!