Valheim is currently one of the hottest games in the game world. Everyone loves it but do you really know how to deepen playing experiences? Epic Loot mod will tell you how.

Valheim is an online open-world survival craft co-op game that was developed by Iron Gate AB. In the game, you will control dead Viking warriors and fight Odin’s ancient enemies and monsters. The game itself is just so attractive, but with the Epic Loot mod, your adventure in the game can be much more interesting and thrilling.

What does the Epic Loot mod offer to you?

The mod aims to bring a loot drop experience to gamers with many magic effects on magic items. The mod has not been done yet, meaning that you can expect much more than what it is currently offering now.

The author is putting his effort into adding new textures, fixing bugs and finishing things up. As a player and a Valheim lover, you can contribute much to the process by sending feedback to the author about your experiences after playing, for instance, about bugs, balance issues, missing content, suggestions for new magical item effects, or any art improvement.

Most of the Valheim mods have been considered a blessing, and Epic Loot is not an exception. Epic Loot mod is currently in the early process of development. However, the unique playing experiences it brings to gamers are undoubtedly real with many uniquely powerful magic items. These items make the game which is initially funny much more thrilling. You can find them out on loot drops and chests. Instead of spending time hunting resources, users now do not need to do so, which saves them a large amount of time. 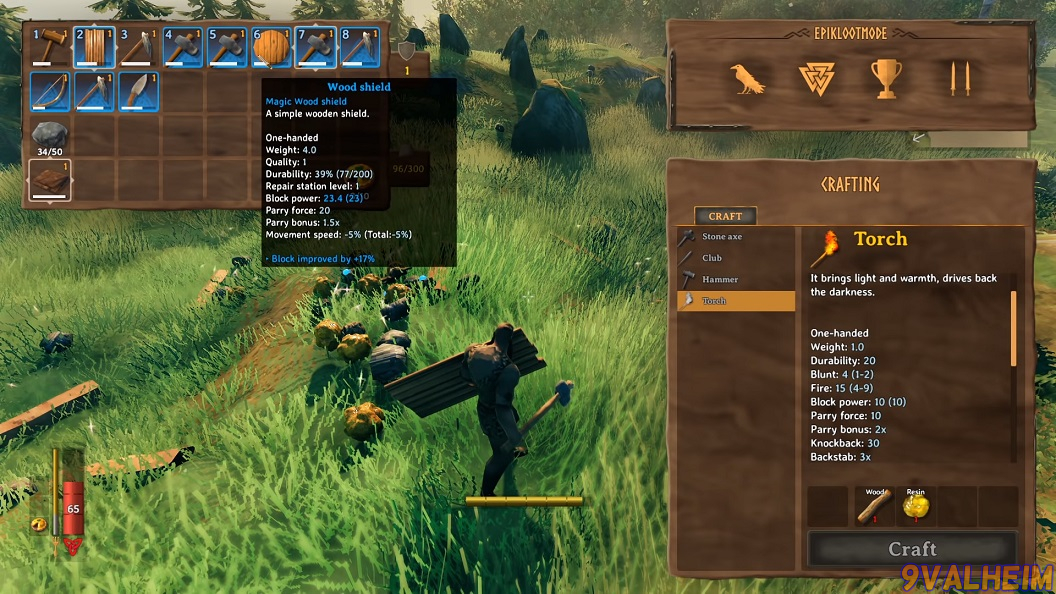 The Epic Loot mod style can remind you of Diablo with its four different tiers: magic, rare, epic, and legendary. Once you install the Epic Loot mod, it means that you are allowed to point out which tier to target, meaning more interesting and customized experiences. In case you are not specified to the tier you’d love to, the Epic Loot mod will give you resources from other tiers along your way.

When it comes to different effects of magical items in the game, gamers will be satisfied as the Epic Loot mod will peak your interest to the highest. The best effects that should be mentioned include Luck – which increases the chance of drop rate and rarity chance, Warm – which prevents players from freezing, Duelist (sword, normally when the off-hand is empty, block power and increase parry),…

A brand new feature that must be mentioned is a new crafting station. This unique station allows gamers to add rune-based enchantments to their crafted and customized weapons. You can harvest these runes by melting down the heads of the dead bosses. Even if you do not expect that, it has to happen and all that you’re gonna do is to take additional power to your builds over trophies any day and anyway.

magicmats
Spawns a bunch of all the magic crafting materials

How to install Epic Loot Mod?

To install this mod requires you to install BepInExPack Valheim first. After installing BepInExPack, Copy the contents of “files” to a new folder in your BepInEx/plugins/ folder called “EpicLoot”

The development of the Epic Loot mod is still in progress. If you want to try the brand new and incredible mod, you need to be patient. To install it in the future, you might need Extended Item Data Framework.

Current Known Mod Conflicts:
BetterUI (Nexus, Thunderstore): You won’t be able to see the magic item properties in the tooltip. Go to the BetterUI config and set showCustomTooltips = false
Crafting With Containers (Thunderstore): Uses double resources when crafting, some other features break. Recommended to not use with EpicLoot.