Creature level and loot control is an useful mod for players

Creature level and loot: what is new for your game?

Many mods were uploaded on the system to support the players in Vaheilm. Creature level and loot is one of these useful mods. Let us show you about this mod.

Vaheilm is an interesting immersive game. Many people all over the world have enjoyed this game with excitement and try all the methods to make this game more wonderful. Many mods are created to support the players in Vaheilm. Our below article shows you about one of those mods – the creature level and loot control. You will learn about this mod in the game to have a more interesting one for you.

What are the creature level and loot mod in Vaheilm?

This mod is created by an account named Blaxxun. The players can start this mod for their Vaheilm from 14 March 2021. And many of them confirmed that they feel comfortable and have fun with this mod.

New features you can find in the Creature level and loot control?

Many new and useful features are integrated into this mod. Firstly, you have various options that allow you to adjust the combat difficulty as well as rewards.

With this mod, each creature level can’t have additional loot. And you can adjust the number of dropped items, too. Even you can set a multiplier for such items. In case you would like to do, the mod also allows you to let your enemies drop more trophies. It is the same for the bosses. Bosses can drop more and more loot or trophies if you let them do it. 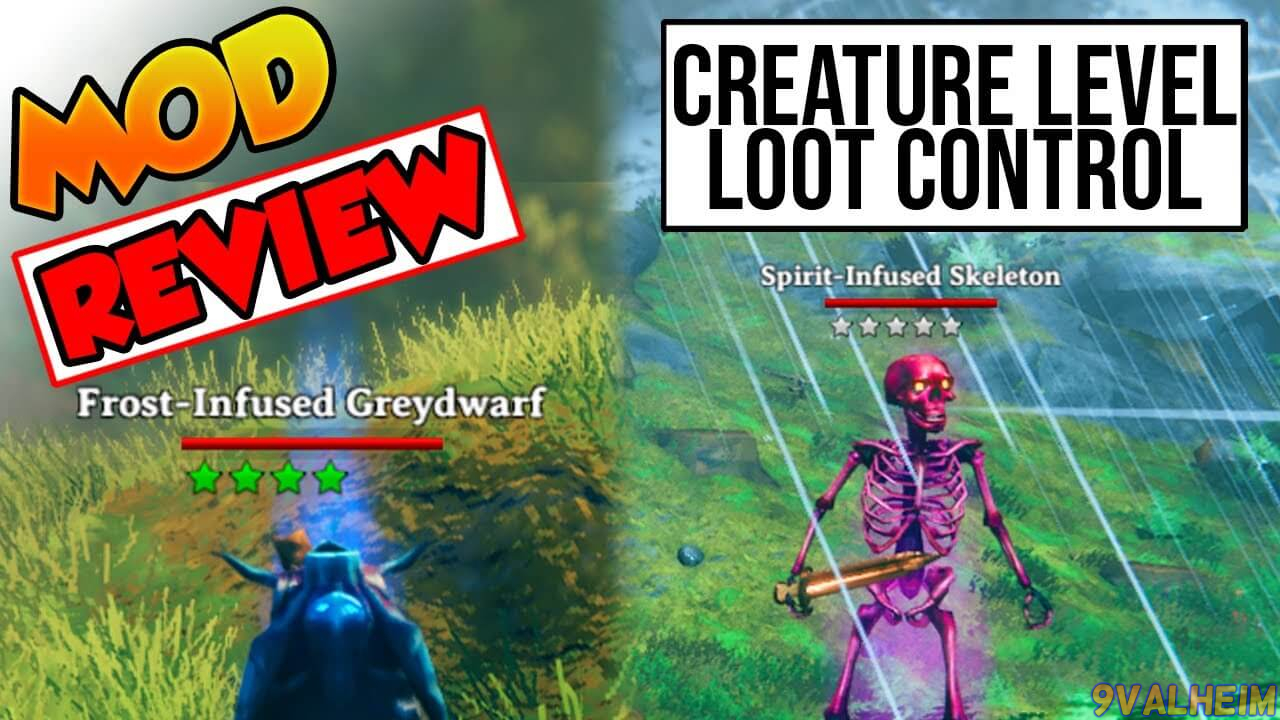 About the creature control

There are so many new features that you can find in the Creature level and loot control. You can see something new related to the configuration and the color of the creature as well. Below is the list of new features when it comes to this mod.

Many new features to use for your game with Creature level and loot control.

Many other new features are provided to you when you apply the Creature level and loot mod for your game in Vaheilm. If you have experimented with this mod, we hope you would feel free to share it with other players and us.

Bosses
You can set a minimum and maximum level for bosses as well, if you want your bosses to spawn with up to five stars.
There is also the option to let your bosses spawn with different affixes, making them even more difficult to kill:
Reflective – Dealing direct damage to the boss will deal damage to you as well
Shielded – Takes 50% reduced damage from arrows
Mending – Regenerates health over time more quickly
Summoner – Summons strong creatures every 20% of maximum health lost
Elementalist – Deals 20% increased elemental damage
Enraged – Deals 30% increased physical damage
Twin – Spawns a second boss. The boss and its twin boss have 25% less health and damage and have shared health.

Loot
For loot, you can set a chance for additional loot with each creature level and set a multiplier for all dropped items as well. You can even let enemies drop multiple trophies, if you like. You can also let bosses drop more loot or multiple trophies.

Multiplayer
For multiplayer, everyone in your group should have this mod, preferably with the same settings (you can install the mod on the server, to make this happen, see the hints below). Otherwise, the client controlling the spawn will be responsible for the level of the enemies. Also, you need this mod to see the actual level of the creatures or all enemies above 2 stars will just show up without any stars.
Or don’t tell your friends about this mod, spawn some 5 stars Lox and tell them to parry them, while you are shooting from a safe distance using your bow. Watch them die and then laugh uncontrollably like the psychopath you are.
The mod has an option to adjust the HP and DMG increase for creatures per player in multiplayer.

And be mindful with the settings. If you spawn an entire Fuling village with 5 stars Fulings, changing the settings or disabling the mod will not revert their level.

How to use this mod
Vortex user
If you are using the latest version of Vortex, you probably have BepInEx and the BepInEx Configuration Manager installed already as these are included in the Vortex app.
Simply hit the Vortex button at the top of the page to install the mod, start up the game and press F1 to change the configuration of the mod.

Synchronizing a configuration on a multiplayer server
You can install the mod on the server just like you would install it on the client as well (requires BepInEx on the server as well). If you do that, the server will automatically synchronize all settings, including the YAML configuration between all clients. There are two different modes that you can use:

Locked Config – Once you’ve started up the server with the mod installed, you will find a setting at the top of the configuration file, which looks like this:
[1 - General]

## The configuration is locked and may not be changed by clients. Only active on servers.
# Setting type: Toggle
# Default value: Off
# Acceptable values: Off, On
Lock Configuration = Off

# Define your own groups here and assign creatures to your groups. There are default groups for all biomes, which do not have to be created by you, unless you want to assign different creatures to it.
# Special groups: all, creature, boss
groups:
My Plains Group:
- Deathsquito
- Fuling Berserker
- Lox
My Bosses:
- The Elder
- Moder

# This will prevent Deers from having their size increased per level and will double the loot you get from Deers with at least 2 stars, until you reach world level 1.
Deer:
size: 0
loot:
0: [1, 2]
1: default

How do you install Creature Level and Loot Control Mod?