If you are stuck to Valheim survival game and its wide range of mods, you must know BepInExPack Valheim mod. This mod is important as it makes other mods possible.

Created by BepInEx Team, the BepInExPack Valheim mod is a tool that is made especially for this hottest survival game. No matter which Valheim mod you want to try, remember that you need BepInExPack to make other mods functional.

What is BepInExPack Valheim Mod?

From its launch on February 2nd, 2021, Valheim is a hit in most game communities. The Viking survival game, inspired by a Norse mythology culture, has a unique approach to the survival genre, making it stand out from others and get tons of new players in just a few weeks.
Because the game still does not have official mod support, modders everywhere continue to find creative ways to add the mod to the Valheim game title. Their effort allows gamers to experience the Valheim game in more exciting ways. If you are a fan of Valheim mods, you know the name BepInExPack Valheim mod. BepInExPack mod is necessary because, without it, the others cannot function well.

BepInExPack Valheim mod features and why you need it

If you love Valheim mods and are looking for the best mods for the most thrilling game experiences, several prerequisite mods (that make the other Valheim mods possible) are a must. The reason is that without the BepInExPack Valheim mod, the other mods of the game cannot perform their functions and cannot co-operate with each other.

BepInExPack for Valheim plays a similar role to Valheim Unstripped DLLs: providing a general-purpose framework for unity modding. This BepInExPack mod gives creators the tools required to adjust Valheim. You can download the mod you love on the internet by simply typing the mod name. Then, following the instructions to get all the necessary files set up in the right way.

This is the first step. The second one is to install BepInExPack Valheim mod because no Valheim built-in mod support is available at the moment.

The Valheim BepInExPack includes different tools and libraries, which will help users to:

The BepInExPack Valheim mod is preconfigured and used for Valheim modding. Particularly, when BepInExPack mod releases changes, they are for some purposes as following:

This pack is preconfigured and usable for Valheim modding.
In particular, the changes from base BepInEx releases are:

How to install BepInExPack Valheim?

When installing the BepInExPack Valheim mod, you will see two buttons: install with mod manager and manual download. As you do not have a mod manager, it is suggested that you opt for Manual download. While installing the mod, remember to extract the archive into a folder (not the game folder). Then, move the contents of BepInExPack_Valheim folder into the <Steam Location>/steamapps/commom/Valheim. If you have done things in the correct way, your folder will look like the following image and all that is left is to follow either Windows or Linux game running instructions. 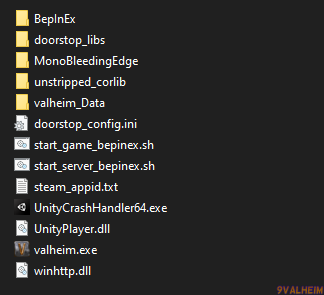 Valheim is no doubt a hit in the game market. For more thrilling and amazing experiences when playing this survival game, you can try different mods available and don’t forget to install the BepInExPack Valheim mod to make all other mods functional.

No need to configure. Simply run the game. If everything is correct, you will see a console pop up.

At this moment you will not see any clear indication if BepInEx works.
It is suggested to test by installing a simple plugin such as MessageCenter from BepInEx.Utility.

This guide assumes you have enough knowledge working with Linux.
If not, it is suggested you use ValheimPlus instead and server hosts that support it out of the box.

If done correctly, you will see BepInEx bootstrap messages in the terminal.

If BepInEx was loaded successfully into the game, you should see BepInEx version info in top left corner of the main menu: