To start building VincentNacon’s Fish Ramp Trap in Valheim, gamers will have to assemble wood and construct a Workbench close to where they want to place their Trap.

This trick works best in the Meadows biome, where threats Aren’t so severe as other surroundings, and near the ocean, players are guaranteed to Discover much Fish right away. 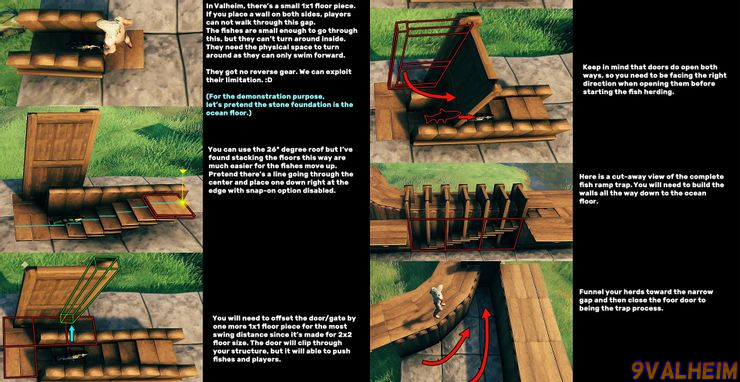 Because the participant will have to build on the seafloor, it may be essential to terraform a small land bridge utilizing the Hoe directly together with the Trap. Each time they want to elevate the ground will require four Stones.

To build the Trap, players need to build a makeshift staircase, like a ramp, using 1×1 floor tiles, starting on the ocean floor and ending on dry land. Placing a wall on either side of the floor tile ramp ensures a Viking can’t go through, but fish can. It also ensures the fish won’t be able to turn around once it is trapped. VincentNacon suggests stacking the floor tiles without the snap option enabled so the tiles stack in a stairstep pattern, rather than a flat line.

Players will then need to build a set of doors or gates one 1×1 tile away from the walls, giving it just enough room to swing in. When opened, these doors will clip through some of the wall but will push a Fish into the next part of the Trap. Once the Fish has been pushed up to dry land, the Viking can grab it; it is not possible to pick up a Fish while swimming, which is why the Fish Trap is necessary and effective.

Once these basics are covered, players can build the funnel shape seen in the final image above. Using walls and building a floor on top, players can ensure they don’t end up taking an inadvertent swim when trying to herd Fish. To use the Trap, the Viking needs to have enough stamina to jump in the water and scare a Fish or several toward the widest part of the funnel and into the narrow, 1×1 area. They can then jump up onto the structure and open the doors to push the Fish onto dry land, where they can grab it and cook it.

[Valheim guide] How To Craft and Find Specific Items

How To Craft in Valheim, How To Find Specific Items in Valheim The article will help you locate and / or craft certain items and equipment in the game Valheim....